There are many different stories about the origins of Valentine’s Day, most of which go unknown to many.  So to start this mini history lesson, let’s go back to around 270 A.D. in Rome.

One legend suggests that when Emperor Claudius II of Rome outlawed the marriage of soldiers and young men, a saint named Valentine defied Claudius and continued to marry young couples.  When the Emperor found out about Valentine’s actions of betrayal, he ordered that Valentine be executed on the 14th of February.

Other… interesting… stories say that from the 13th to the 15th of February in ancient Rome, the Romans celebrated the feast of Lupercalia.  During this feast, the men would sacrifice a goat for fertility and a dog for purification.  They would then take the hide of the sacrificed animals and hit crops as well as women with them.  Women often welcomed the touch of the hides under the belief that it would make them more fertile.  Later that day, the women would place their name in a big urn and the single men of the city would draw a name out.  Those two people would be a couple for the rest of the festival and it often led to marriage.  In the 5th century, Pope Gelasius I combined St. Valentine’s Day with Lupercalia to get rid of those… unique… rituals.

In the Middle Ages, Shakespeare and other notable artists at the time romanticized this holiday and it eventually gained a lot of popularity. 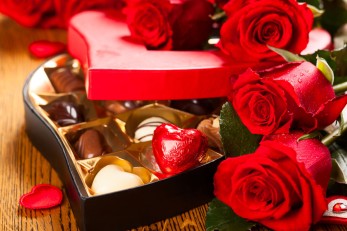